A Selection of Historical Record Transcriptions

One of the obstacles genealogists face when researching South African history is the difficulty of consulting primary sources, not only because they may not be readily available, but often interpreting the script can be a daunting task.

Our aim is to produce readable and intelligible transcriptions of South African documents that have genealogical value for researchers, and to make them publicly available.

The transcription of these documents is an on-going process and depends largely on the availability of (copies of) original documents and transcribers.

If you feel you can help with this project or you have any feedback, comments or suggestions, please contact one of our website managers: Corney Keller or Richard Ball.

We hope these transcripts will be of use to researchers.

This is the fourth series of marriage registers of the Dutch Reformed Congregation in Cape Town following the third register which covered marriages and memberships for the period 1713-1756. This register contains marriages over the period 1757 to 1803. The pages are rubber stamped with ascending numerals starting with no. 1 and ending with no. 267.

The page following number 6 is stamped as number 10. The pages that follow 10 are numbered 9, 7, 8 ,11, 12, 13, 14, ... etc. This suggests that (some) the pages were bound in a different order at the time of rubber stamping them, and rebound at a later date to order the pages chronologically.

The members of the original settlement at the Cape from 1652 onwards were supplied by the Dutch East India Company with a ziekentrooster (comforter of the sick). He held Sunday services where he was allowed to read certain passages from the scriptures and to instruct the children in their religion, but as a lay person he had no authority to administer the sacraments (offer Holy Communion, perform marriages and baptisms). Ziekentroosters up to 1665 were Willem Barentsz Wylant, Pieter van der Staal, Ernestus Back and Jan Jorisz Graa. Marriages were conducted either by the Commander (civil marriages were part of the normal system in the Netherlands) or by ministers passing on ships calling at the Cape and these latter also conducted any baptisms required.

Eventually the Dutch East India Company management decided to appoint a resident minster at the Cape (all such religious ministers were company salaried officials) and on 18th August 1665 Dominee Johannes van Arkel landed at Table Bay. Later a church was built and its present day successor is the Grote Kerk in Cape Town. At that time this particular denomination, which enjoyed the status of "public" or "privileged" church of the Dutch Republic, was known as the 'Nederduitsche Gereformeerde Kerk' but renamed the 'Nederlandse Hervormde Kerk' (Dutch Reformed Church - DRC) in the Netherlands in 1816. At the Cape (then under British rule), however, it retained its original name and in modern day South Africa it is known as the Nederduitse Gereformeerde Kerk (NGK).

This muster roll is that of the Free Settlers compiled on 31st December 1713, that is those not in the emply of the Dutch East India Company. In his History of South Africa 1652 to 1795 G.M.Theal writes:

In 1713 a terrible calamity fell upon the country. In March of this year the small-pox made its first appearance in South Africa. It was introduced by means of some clothing belonging to ships' people who had been ill on the passage from India, but who had recovered before they reached Table Bay. This clothing was sent to be washed at the Company's slave lodge, and the women who handled it were the first to be smitten. The Company had at the time about five hundred and seventy slaves of both sexes and all ages, nearly two hundred of whom were carried off within the next six months. 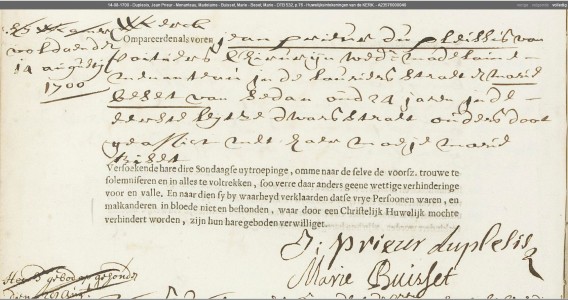